An illustration of Metropolis–Hastings algorithm

Metropolis–Hastings algorithm is a method for sampling from a probability distribution. It is used when direct sampling is difficult.

This post illustrates the algorithm by sampling from \(\mathcal{N}(. \mid > 5)\) – the univariate normal distribution conditional on being greater than \(5\). This example has been chosen for its simplicity, for understanding how the algorithm actually works.

Simulation code has been written in R and is available at that address. 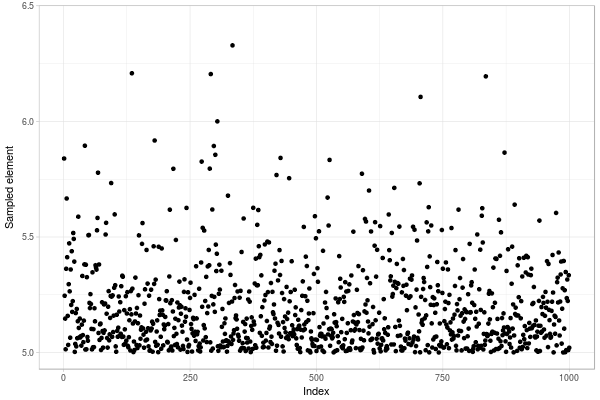 Fig. 1. Sample of size 1000 of a truncated normal distribution drawn with Metropolis–Hastings algorithm

The aim of the algorithm is to simulate a sample following a distribution (target distribution). We assume that this target distribution has a density, and that we know it up to a multiplicative constant. This means that we do not need to know exactly the normalization constant, which can be difficult to approximate for rare events or high-dimensional densities.

In this example, we want to simulate a sample of the standard normal distribution knowing that the values are greater than a limit \(5\). If we want to obtain this sample directly by reject algorithm, most of values are rejected:

Note that this instrumental distribution is symmetric. This is not a requirement for Metropolis–Hastings algorithm, but simplifies computations a lot. In particular, density of the instrumental distribution is not needed in this case (we only need to know how to sample from it). The algorithm is sometimes called Metropolis algorithm in this particular case.

In the previous instrumental distribution, parameter sd indicates range of each step. When sd is small, each step is small and the probability to be accepted is large. However, the Markov chain is moving slowly and many steps are necessary to reach stationary distribution. When sd is large, larger steps are done, but are accepted less often.

We construct a Markov chain \((x(t))_{t}\). It is designed to have a unique stationary distribution which is the target distribution. You can read Section 2.1 of this course for formal derivation. As a consequence, given \(T\) a large number, \(x(T)\) can be regarded as a sample element from target distribution (and we hope that \(T\) is not so large…).

It remains to define the probability \(\alpha(x(t),y)\) to accept the move. It is simply the quotient of probability of the target distribution (it is a little more complex when instrumental distribution is not symmetric).

In this section, we sample \(\mathcal{N}(. \mid > 5)\) using Metropolis–Hastings algorithm. We define length of the chain, the parameter of standard deviation in the instrumental distribution, and the initial state.

Two consecutives elements of the chain are correlated. This issue is inherent in MCMC methods.

We obtain an almost uncorrelated sample by selecting a subset of \(x(t)\). For example, if we know that the chain has almost reached stationarity after a certain number of steps s, then we can select \(x(s)\), \(x(2s)\), \(x(3s)\).

In our case, the number of steps to wait depends on the sd parameter. In the following, we took step=1000. 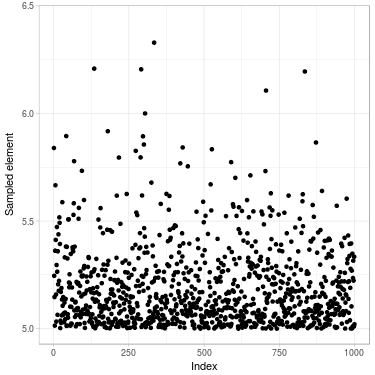 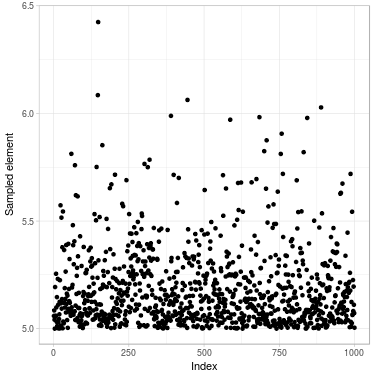 Visually, it looks good. Further checking are necessary, especially by checking autocorrelation of the sample.